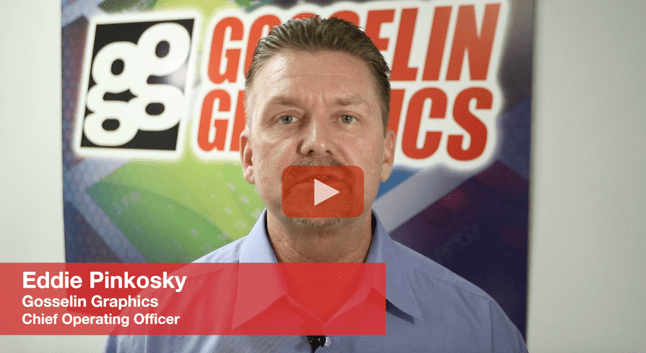 What does a 25% increase in throughput mean to a print shop? For John Gosselin, Owner of trade printer Gosselin Graphics in Fort Lauderdale, FL, it means less overtime. “Jobs that would have takes 12 hours before now can be done in an eight-hour shift on our new RMGT 7 Series 755 GXL-E, ” reports Gosselin, who started his trade-only company in 1997 out of his father’s garage with a Hamada 665 11×17-inch, two-color press. “I learned the printing trade in high school,” he recalls, as part of a vocational education program, and has “ink in his blood” ever since. 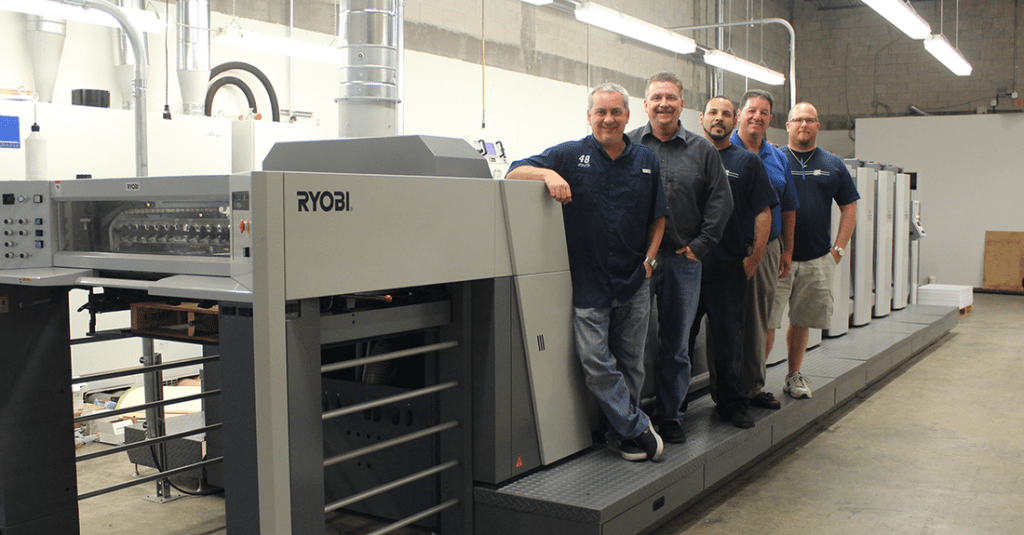 Customers were asking for spot UV work, Gosselin explains. “They wated the ability to sell work that requires interdeck drying capabilities.” The way RMGT does it is by a process called “Chemical Embossing”. Purchased through Paper Handling Solutions and Graphics IV, their dealer in Florida, the press was installed this past January. The five-color sheetfed press is manufactured by RYOBI MHI Graphic Technology Ltd. (RMGT) and features an inline coater with inter-deck dryers for either untra-violet (UV) or aqueous coatings. Gosselin still has a Hamada model on its pressroom floor, an H-434 12×18-inch four-color press, but the firm has been a RMGT customer for nearly 10 years now, says its owner. “I looked at another manufacturer’s version of this press and the price was more than double,” he adds. Marc Spinola, from Graphics IV in Orlando, FL, helped Gosselin Graphics to not only consider the reduced acquisition costs, but also the total cost of ownership with availability of parts and access to RMGT techs at the Graphics IV offices nearby.

Also running at Gosselin is a RMGT 754 straight four-color press as well as a 3304 four-color model and a Hamada H-434 12×18-inch unit and two Xerox digital presses. “We measure productivity by how many gang runs we run per night, which usually averages around 10.” Gosselin explains, adding that he runs a three-shift operation in his 15,000-square-foot, South Florida facility. With the inline UV coating capability, “my guys are done by 7 a.m. now – they don’t have to wait for someone {else} to apply the coating off-line. Before {the new press}, they were cutting until noon the next day,” which meant a half shift of OT draining Gosselin’s payroll.

Coating inline is so much more efficient, Gosselin adds. “We had been doing UV {coating] for several years off-line: print, dry and then UV coat,” he says. But the firm’s 25 employees were finding it a challenge to meet Gosselin Graphics’ 24-turnaround promise to its trade customers. “Off-line coaters tend to break,” he notes. “It’s the nature of the beast.” The new RMGT 755 GXL-E allows Gosselin and his team to increase the volume of jobs and turn work faster. The versatile reseller runs a combination of custom work and gang-run jobs, according to Gosselin — everything from UV business cards and postcards to brochures (both gloss aqueous coated and uncoated), catalogs and even large-format signage. Its full-service bindery offers saddle-stitching and perfect binding.

After high school, Gosselin paid his proverbial dues by working as a driver at a printing company, then was trained on a press. When the firm closed five years later, trade customers followed him to the garage, which he soon outgrew, graduating to larger shops over the years: first a 750-square-foot space, the 1,500 square feet. Gosselin moved to his present location nine years ago. “At first we had 7,500 square feet,” he remembers. Then in 2014 they took over another 7,500 in the building.

We’ve had steady growth since the beginning,” Gosselin says of his now $6 million company. He attributes annual sales growth to word of mouth. “News travels fast when you get new equipment!” he reports. He also credits the firm’s website for much of their growth over the past several years.