Chris Manley is a third-generation Printing Industry Sales & Marketing professional, with both his father, Bill Manley, and his grandfather, Bill Kirn, being top performers with Addressograph-Multigraph dating back to the late 1940’s. Bill Manley established Graphco in 1976 as a spin off from AM and Chris started his industry career as part of the Blue Print Collating Team which assembled Bid Sets for Cleveland area building projects like the BP Building, Medical Mutual Building, Tower City and The Cleveland Clinic.

As Graphco expanded its sales and service presence throughout Ohio, Western Pennsylvania, Kentucky and West Virginia between 1985 and 2005, the responsibilities for Sales Management, Product Line Development and Marketing became a growing part of Chris’ role at the company. Graphco quickly became the National #1 Dealer for major product lines like Ryobi, Hamada, Sakurai, Standard Horizon and MGI while constantly offering strong and responsive technical support to Graphco customers throughout the region.

Chris became President of Graphco in 2005. In 2013 Graphco became a founding member of GSNA (RMGT’s North American Distribution Group) and became the importer and distributor of the RMGT Offset Printing Presses throughout the Midwestern United States. In this channel, Graphco has become consultative partner to many customers in our 13-state territory as they’ve added the lowest cost-to-print Offset Equipment to their portfolios.

Chris has been an active member of Printing Industries of OH & N. KY for many years. He was inducted into their Graphic Arts Hall of Distinction in 2016. He and Graphco maintain membership in all local PIA groups throughout Graphco’s territory, as well as NAPL, GATF and NPES. As a member of the board of NAGASA (North American Graphic Arts Supplier Association) from 2003-2007 Chris served as Chairman of the organization from 2004-2005.

Chris and his wife (and business partner) Theresa have two sons who live in Chicago and New York respectively. Chris and Theresa make their home in Chagrin Falls and they enjoy travel, photography and spending time with family and friends.

Derek serves Graphco as the Midwest Regional Sales Manager for the RMGT product line as well as the Territory Manager representing the full product line in the state of Illinois and the major markets of St. Louis and Kansas City.

Derek has been servicing and supporting the print industry since 1989 as a printing application sales specialist. He is well rounded in all aspects of the graphic arts industry. Before starting his career in sales, he attended Triton College in River Grove, IL where he received his 2 year associates degree in Graphic Arts and Printing Technology. While attending Triton he worked at the Loyola University in-plant printing department where he managed printed jobs from key line paste, press to bindery and packaging. In 1985 as a college freshman, Derek attended his first print show and fell in love with the idea of selling the equipment instead of operating it. Derek’s commitment to the industry speaks volumes as he is a past president of five industry clubs and organizations and is still very active with the GLGA Scholarship program in the state of Illinois.

Derek’s approach to servicing his customers is the #1 reason why he has been successful at every step in his career. His philosophy is simple and it’s the reason he has such a strong reputation throughout the Midwest. “I work for my customers first and foremost because without them I have nothing and the company I represent has less.

Derek is an avid sports fan with his passion in Baseball and Hockey. He loves spending time with his wife and two adult children.

Gary is the Territory Manager for Ohio, Eastern Michigan, Kentucky and Indiana. He spent 32 years in print operations, management and as an executive team member at a large, reputable company. He has developed a keen understanding of pre-press, color management, offset printing, digital printing, digital bindery and traditional bindery. Gary’s many and varied experiences in the print industry makes him uniquely qualified to offer the buyer effective solutions. Gary says, “My experience as a buyer and operations manager allows me to fully understand a customer’s needs. I know firsthand the importance of return on investment (ROI) for every purchase.” Gary’s relationships with his customers are a priority and he is motivated by helping them grow their companies. He enjoys his work immensely, but spends his free time with his wife and 4 children and their growing family. In addition, he likes to golf, walk the dog and even work in the yard. 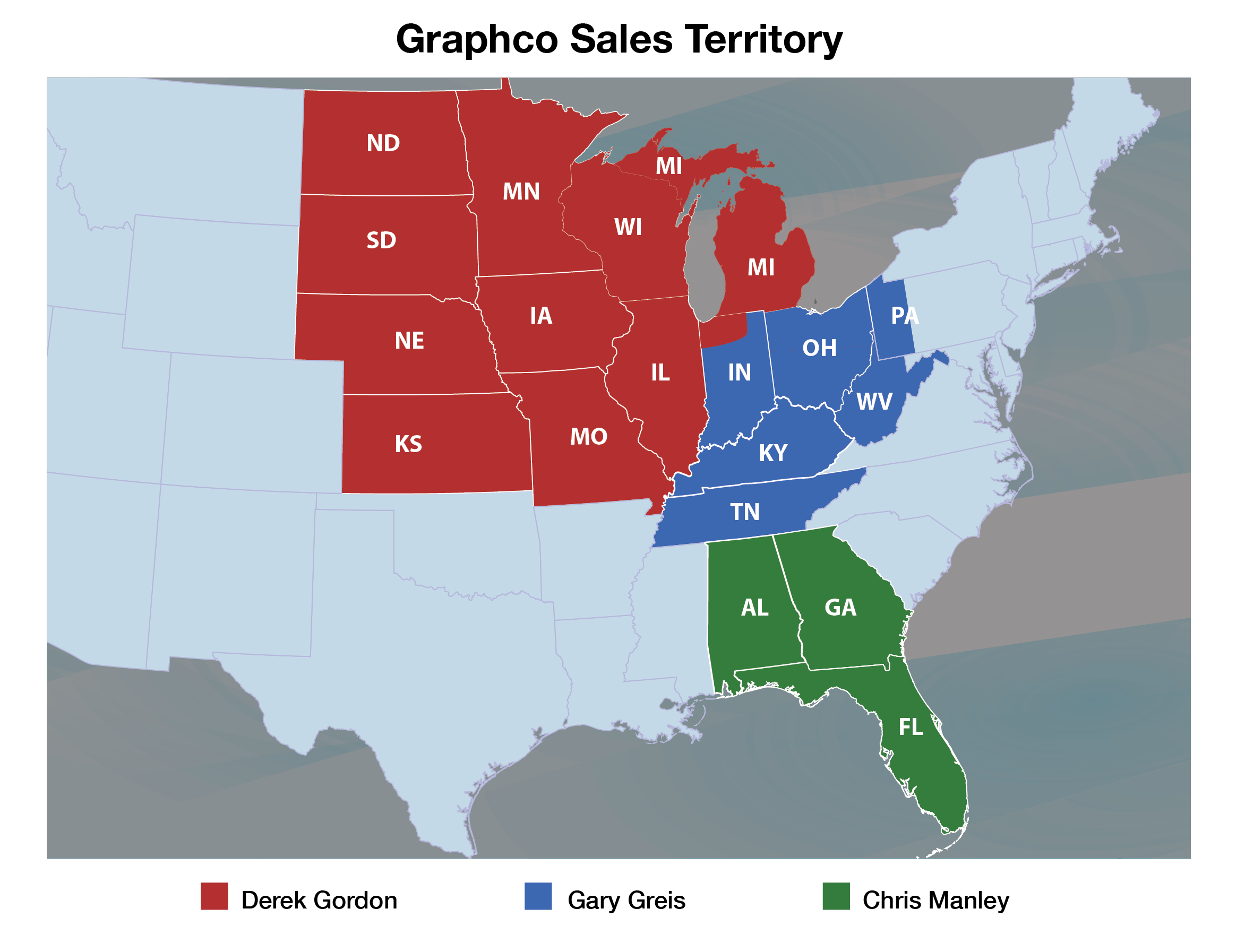