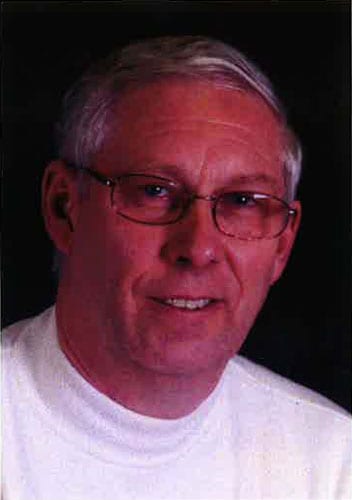 Born April 2, 1952 in New Washington, Ohio. Graduated Buckeye Central High School in 1970. Graduated from Otterbein College in May of 1974 with a BA in Life Sciences.

My print career started at RR Donnelley and Sons on September 1st, 1974, pulling mail bags for mailing telephone directories. I only did this for one day and became a hoist driver loading mail cars for railroad shipping. I then moved to set-packing where we packed encyclopedias for shipping on a newly devised cart system. I was laid-off on the last day of February in 1975 because RR Donnelley lost the EB (Encyclopedia Britanica) account.

I started on July 21, 1975 at The Herald Inc. as a one-color pressman on an old Harris LTV press running CIS Litho for packaging labels. The head pressman was hurt the previous Thursday so I assisted him on a Harris LXB (23 x 29″) single color press running Jungle Larry rack cards for Cedar Point. I later Pressroom Manager. I then moved to the Bindery which became a separate department. I then became manager of the Pressroom and Bindery. In 1980 I moved to Warehousing, Fullfillment and Shipping which was also now a new department. I moved to Purchasing later that year and was there for 18 years. I was named President in 1999 and Suzanne and I purchased The Herald Inc. on July 22, 2002 from Bob and Carolyn Bordner.

I have been able to see The Herald move from a Letterpress shop to a Letterpress-Offset shop and now become a Digital, Offset, Web shop. We were the first company in Ohio to put a Kodak 2500 Digital press with Clear Coating and a Kodak Digi-press which moved The Herald into the digital age. I have witnessed the print world move to bigger, faster, more complicated, and computerized presses and bindery equipment. The computerization and change from film in the prepress has been amazing! Change will be ever-present and evolution will never stop.

Suzanne and I started Stump’s Converting in 1990 to fill a niche in the quick turn, mechanized bindery world. Suzanne has been ultra-successful which has been very beneficial to The Herald Inc. She is very active in the print world and works with me to keep both Stump’s and The Herald very modern and focused on our customers’ needs.

Our company experienced some hard times as all printers did in the late 2000’s, and we had to restructure our thinking and change our business model. These were traumatic times for The Herald. Suzanne and I are so very proud of our workforce who worked with us to save the company. The Herald would not be what it is without their cooperation and hard work. They are the best! Everyone worked extra hard to save our company and they did just that!

It is amazing to see how print has transitioned over the years and yet sad to see how many GREAT printers are no longer with us anymore. If you want the honest TRUTH, I had no intention of becoming a printer in the early days, I just needed a job until I reapplied to medical school. I had a roommate (Brad Winn) at Otterbein who worked in the college print shop. I often wondered why anyone would want to work under such conditions and put up with all the chemicals and smell. Brad was a neighbor to Brad and Mike Hance whose dad owned Robin Printing. I had a chance to visit to their Dad’s facility during those days and had absolutely no thoughts of a print career. (The Good Lord works in mysterious ways.)

I have always been receptive to change and modernization which has been a trademark of The Herald Inc. There will be more changes to come and the print industry will adapt and change to provide the most economical and efficient means of producing print for their customers.