PLACENTIA, Calif.—August 19, 2015—In early April, 2015, the printing firm WholesalePocketFolders.com took delivery of a RYOBI MHI 920 LED-UV press purchased through Print & Finishing Solutions, of Placentia, California. Formerly known as Can Do Printing, the Phoenix-based trade-only printing firm rebranded its commercial printing shop and reinvented themselves by going online with presentation folders. With this intent, the team searched to find an ideal press to produce short-run, two-sided presentation folders. 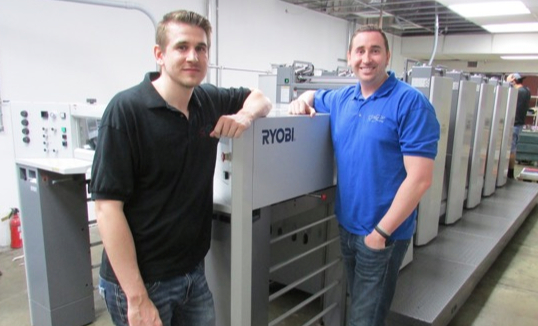 (From left) Kyl and Ty Blankenship. The brothers’ father, Franko, founded the print firm in 1983.

“We were the first U.S. site with a straight five-color configuration of the RYOBI MHI 920 LED-UV with Simultaneous Plate Changing,” explained General Manager Ty Blankenship, whose father, Franko, started the business in 1983. “Running eight up is imperative to our work-and-turn production,” he noted. With between 15 and 25 orders coming in daily, Wholesalepocketfolders.com has produced as few as 100 folders and as many as 100,000 and 250,000. But their sweet spot is in the 1,000 to 5,000 range.

“We are thrilled with the new LED-UV curing technology. Press sheets can immediately advance through our die-cutter and folding/gluing machines without scuffing or scratching issues,” stated Kyl Blankenship, Ty’s brother and production manager at the 35,000-square-foot plant. “The UV inks are a little more glossy, with good coverage. Scores are not cracking on the Top Coat Gloss premium paper that we use.” The WholesalePocketFolders.com facility runs two shifts, six days per week, and employs 20 full-time personnel. “We are more of a custom shop [than some competitors],” he said, “offering over 35 templates to choose from, plus custom dies – start to finish, whatever you want.”

Ty relayed, “On short-run jobs, our RYOBI MHI press gives us the superior print quality of offset coupled with the quick turn of a digital press. On a 250 run, we’ll have 300 good sheets where before it took 700. Make-readies are way faster compared to where we used to be, so we are saving a lot on paper. On average, our set-ups have gone from 20 minutes to down to five [minutes] because we can get up to color in so few sheets.”

With annual sales in 2014 of approximately $4 million, Wholesalepocketfolders.com now is saving money on short runs. “We felt like we were throwing labor and paper down the drain with the older press,” says Ty. “We are saving on electricity, too, since LED-UV curing is more ‘green’, using 65 percent less power than conventional presses. This new model has ‘artificial intelligence’ and is so much more efficient overall.”

About Graphic Systems North America (GSNA)
GSNA is the largest independent source of printing equipment, technical service and parts in North America. GSNA delivers exclusive access to RYOBI MHI’s full line of offset and digital presses for commercial, packaging and in-plant printers in the U.S. and Canada, together with immediate technical support and parts fulfillment. Formed in July 2013 with co-headquarters in four U.S. states and two Canadian provinces, the GSNA group has more than $60 million in revenue and constitutes the single largest offset press sales and service team in North America.