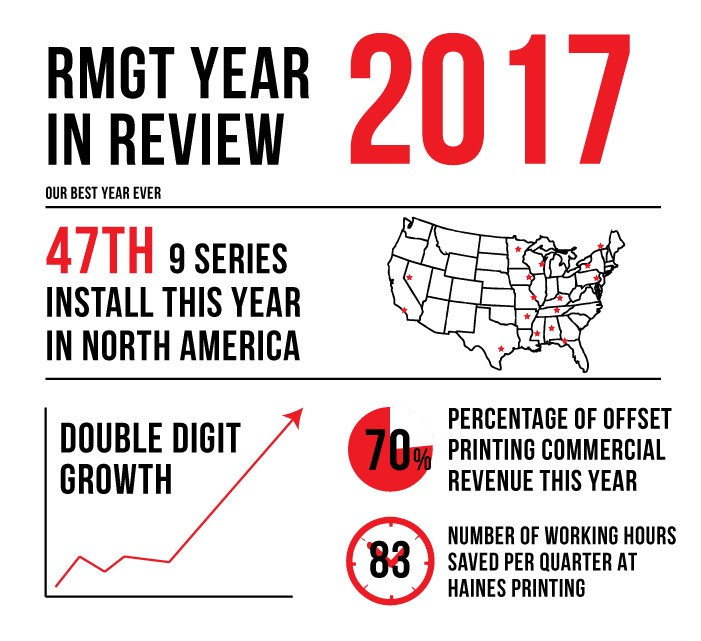 SOLON, OH — January 24, 2018 — 2017 was a fantastic year for RMGT in the North American market. More presses were sold and installed in more locations across the US and Canada. In particular, RMGT is proud to note that the 50th 9 Series press in North America was installed in the fall of 2017, joining more than 700 other 9 Series presses installed worldwide. 2017 also saw rapid growth in long perfecting presses, demonstrating the growing strength and popularity of one-pass printing and LED UV technology across the offset print space.
​
One testament to the strength of 2017 was the resounding success of RMGT at PRINT 17. “Demonstrating our 920PF-8+LED-UV long perfector at PRINT 17 allowed us to share our lowest cost of manufacturing message every hour on the hour,” said Chris Manley, President of Graphco, the Midwest Distributor for RMGT. “We were gratified at how many of the more than 20,000 attendees at the show took time to stop by our booth and see the long perfector in action. It’s really simple math; offset printing still accounts for over 70% of most commercial printers revenue and with RMGT’s perfect blend of automation, reliability and print quality these companies are keen to improve their cost of manufacturing to enjoy bigger profits.”

Simple Math – Printers explain why they chose RMGT presses
Azar Printing replaced two sheetfed presses with one perfecting press from RMGT. “We had great offset presses, but they needed to be replaced,” said Mark Azar, owner of the company. “We considered purchasing a 40-inch press, but I don’t have the power, and I don’t have the pad — I just don’t have room for a 40-inch. This 8-up press fits on the same pad as our older 4-up press, and uses less electricity. Also, I can get a 16-page signature, so this press doubles capacity. This is a big deal for us and now over four months in we could not be happier that we invested in RMGT technology”

Haines Printing, based in North East, Pennsylvania, also purchased an RMGT perfecting press in 2017. “We purchased the RMGT 925 with a coater and 1-over-4 perfector,” said Jeff Haines, owner of the shop. “We were looking for something with the larger, 16-page signature sheet size, but with the smaller footprint and the perfector were something we couldn’t do without.” He noted that on one job alone, the investment has led to “saving 75-90 working hours every quarter. We cut the sheets and set-up time for the inside pages in half, and for the covers, we’re running twice as many on a single sheet — and running them in one pass instead of two.”  Again RMGT’s message is simple math; more work produced at higher speeds with less labor is a Win, Win, Win for printing companies of all sizes.

VISOgraphic, a commercial printer in Chicago decided to replace 3 legacy presses and move that work to their new RMGT 10 Series press. “Our client list includes Fortune 500s and also very talented design and advertising firms,” cites Bob Dahlke Sr., President of VISOgraphic. “Bringing the latest in high end coatings to our customers will allow VISOgraphic to enhance the impact their projects make for their customers.  Our investment in this new press is really a customer-centric decision based on suggestions we’ve gotten from our sales team to better meet their customer’s needs.”

Another shop that saw huge returns in 2017 with an RMGT 9 Series press is Los Angeles, CA-based B&G House of Printing. “I had it in my mind to keep one of my old presses and get a used 40-inch to replace the other,” said Rick Morimura, Vice President of Sales. He quickly found, however, that he could replace two 28” and one outdated 40” press with one RMGT 9 Series press, and never looked back.
​
“2017 was an amazing year across the board,” said Kian Hemmen, Director of Sales, Print & Finishing Solutions, an Authorized Sales and Service Center for RMGT in the Western US. “We welcomed a great number of new customers to the RMGT family this year, and it is gratifying when we hear repeated stories of double-digit growth in their businesses. We are grateful for each and every one of them, and we are incredibly excited to see what 2018 will have in store for us and our customers as well.”