As seen in Printing Impressions PIWorld.com 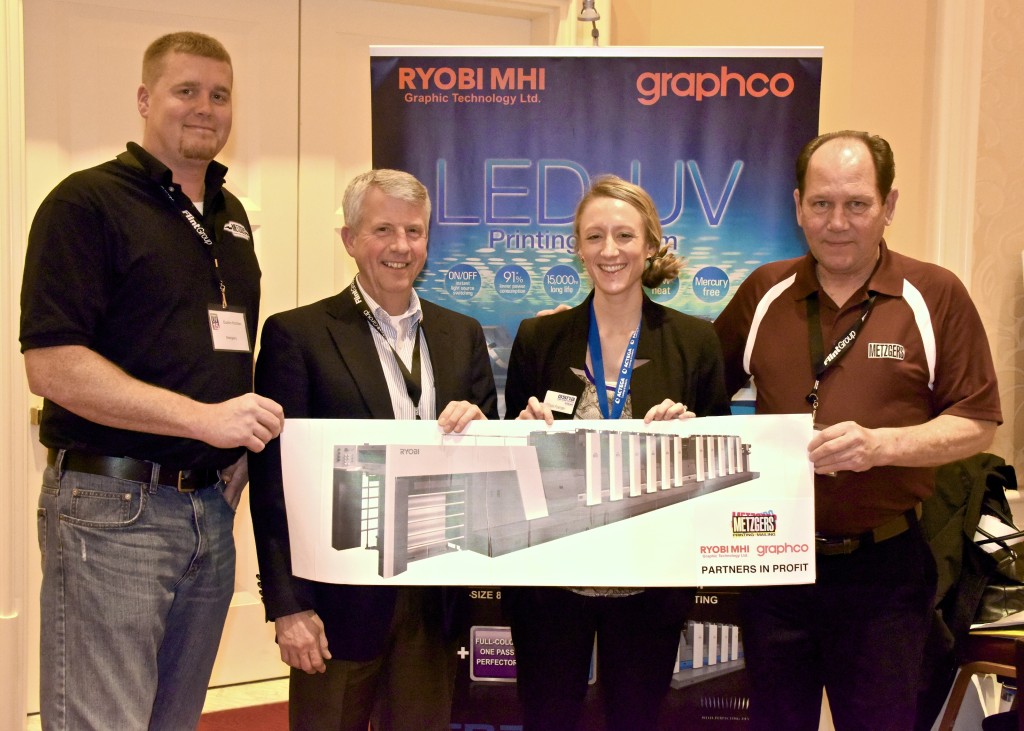 CLEVELAND—March 2, 2015—Toledo, OH-based Metzgers Printing + Mailing has announced its investment in a new RYOBI MHI 9210P 5/5 long perfector with in-line coater. The new press features the latest G3 LED-UV curing technology, Smart Insta.Color make-ready automation and the smallest carbon footprint of any press in its class. “We are thrilled to offer the highest print quality, special effects printing, and faster turnaround to our customers throughout the Midwest,” offered Tom Metzger, chairman and CEO of Metzgers. “This strategic move fits directly into our plans for continued growth. Adding single-pass printing to our pressroom has been under evaluation for several years and the RYOBI MHI 9210P is the perfect fit.”

Strong organic growth through the first half of the decade has set Metzgers apart. Its consistent investment in staff development and aggressive sales promotion, as well as the right major capital investments, have been the formula for success since the company’s foundation in 1976. “Staying ahead of the technology curve keeps us valuable and relevant in the educational, health care, and building products segment, and with our Fortune 500 customers as well,” said Tom Metzger. “Our decision-making process is 100 percent customer-focused and this move will open many doors in the high quality label, packaging, and plastics markets throughout the Midwest.” This customer-centric approach led Metzgers to develop some of the industry’s earliest web-to-print storefronts, as well as a major move into wide-format and display printing, so investing in proven technology like LED-UV curing and a fully-automated RYOBI MHI long perfector fits Metzgers’ innovation model perfectly.

Metzgers Printing + Mailing constantly evaluates the latest technology, and following a visit to the RYOBI MHI Commit to Print booth at GRAPH EXPO, its management team worked closely with Allison Foerster, Graphco territory Mmanager, to determine if the RYOBI MHI 920 series long perfector offered the added capacity and specialty print capabilities to support Metzgers’ growth projections. “Using a comprehensive set of business analytics Graphco has developed, we were able to drill down into their own production data to look for trends and synergy in the pressroom. The five over five with coater configuration became the clear direction,” Foerster explained. This collaborative approach was natural since Metzgers and Graphco have a nearly twenty-year business relationship and the RYOBI MHI presses on Metzgers’ floor have been excellent producers since they were introduced.

The Metzgers Green Printing Initiative recognizes that good stewardship of planet Earth takes more than reducing, reusing and recycling. In 2010, Metzgers installed over 10,000 square feet of solar panels to its rooftop and the company now generates over 13 percent of its annual electricity itself, with no carbon emissions. The RYOBI MHI G3 LED-UV curing technology continues that environmental move since Metzgers will reduce its electrical usage by nearly 60 percent and LED-UV inks don’t emit VOCs. “While productivity and print quality were the most decisive factors in our decision, staying with our Green Printing Initiative was extremely important as well. You can’t beat LED-UV for low emissions printing,” said Tom Metzger.

About Metzgers Printing + Mailing
Metzgers Printing + Mailing continues to lead the Midwest print industry with best-in-class digital and offset printing, wide-format and display printing, highly specialized fulfillment services and customer-oriented Web-to-print storefronts from its 140,000-square-foot complex in Toledo, OH. With the third generation of the Metzgers family joining the company, the original Mission Statement stays the same: “We ensure the vitality and growth of our business by consistently exceeding the expectations of our customers and ourselves. We must treat customers and fellow workers as we would like to be treated — with fairness, honesty, and a high standard of ethics. Working and living within this mission will assure our company of continued success.”

About RYOBI
RYOBI MHI Graphic Technology is among the world’s largest manufacturers of sheet-fed offset printing presses and the world leader in LED-UV technology with over 165 placements worldwide. Our high-speed, fully-automated presses are respected worldwide for unsurpassed print quality, low total cost of ownership, extreme ease of operation, and unmatched reliability. In partnership with Panasonic, RYOBI MHI released LED-UV Curing for Print at DRUPA 2008 and we now offer the only G3 LED-UV technology on the market. Headquartered outside of Hiroshima Japan, RYOBI MHI Graphic Technology is a joint venture company bringing together the best technology and manufacturing expertise of Ryobi Limited and Mitsubishi Heavy Industries. The enhanced product lineup and strengthened manufacturing prowess makes RYOBI MHI an indispensable brand for the printing industry.

About Graphco
Graphco is the industry’s leading provider of offset, digital, and print finishing solutions. Along with other GSNA members, we proudly import the RYOBI MHI line of new offset printing presses featuring LED-UV curing technology, Smart Insta.Color automated make-ready, and our popular Packaging Edition presses. All RYOBI MHI presses offer best-in-class reliability and durability.  The Graphco Technical Service Team stands behind every RYOBI MHI press and Graphco’s reputation for top-notch service is second to none. Since 1976, Graphco has thrived in an ever-changing market place by loyally adhering to our original model for success: Providing best-in-class print production equipment along with reliable and assured technical service.