Toledo, November, 3 2015 – Metzgers Printing + Mailing has commissioned their new RMGT 9210P 5/5 10 Color Long Perfector which is now in full production.  The Metzgers RMGT 9 Series press is the largest and most highly equipped machine of its kind in the world and features the entire suite of RMGT automation plus best in class energy efficiency.  RMGT’s LED UV, Hi-Cure UV and IR Drying technology provide maximum flexibility to meet all production needs.  “We are thrilled to offer the highest print quality, special effects printing, and faster turnaround to our customers throughout the Midwest,” says Tom Metzger, Chairman and CEO of Metzgers.  “This investment in one-pass printing will support our continued growth.  We investigated other options and the new RMGT Ten with LED UV is the perfect fit.” 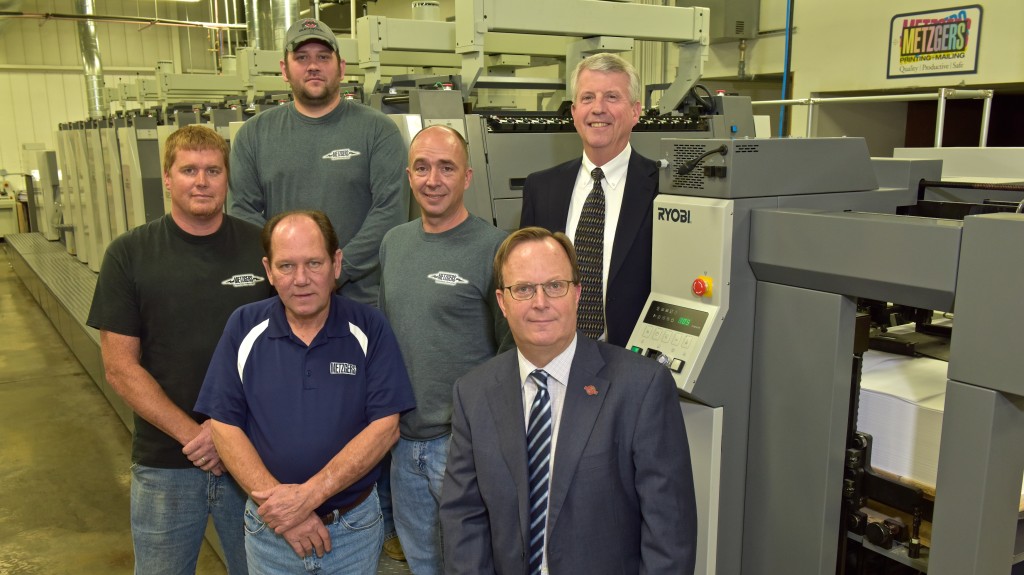 Metzgers’ continued organic growth is due largely to aggressive sales promotion, constant staff development and their consistent pursuit of the most innovative and cost effective means available to produce their customer’s work.  Tom Metzger comments, “Our decision-making process is 100% customer-focused and this move bolsters our commercial print capability and will also makes us more relevant in the high quality label, packaging, and plastics markets as well.”  This customer-centric approach led Metzgers to develop some of the industry’s earliest web-to-print storefronts, as well as a major move into wide-format and display printing, so the investment in proven technology like LED-UV curing and a fully-automated RMGT long perfector fits their innovation model perfectly.

The search for innovation led Metzgers evaluation team to Graph Expo 2014 where they first saw the RMGT 9 Series press in action.  Working with their Graphco representative Allie Foerster, the Metzger team reviewed production records and actual customer jobs to determine the best path moving forward.  “Graphco’s business analytics and consulting with the Metzgers sales team clearly showed that CMYK plus PMS and specialty UV varnishes would best meet their demanding customer’s needs.  The 5 over 5 with coater configuration added with all of today’s relevant UV curing technology became the clear direction,” according to Foerster.  Providing higher value-added print has been Metzgers mainstay for years and offering this quality in a “one and done” workflow makes good sense for their selective customer base.

While reducing, reusing and recycling is a good start the Metzgers Green Printing Initiative recognizes that good stewards must invest to truly protect planet Earth and this RMGT 9 Series press has by far the smallest carbon footprint in the full size press arena.  In 2010 over 10,000 square feet of solar panels were installed on the rooftops of two of the three Metzgers buildings.  This Solar Array now generates over 144,000 Kilowatt Hours annually and in fact produces over 35% of the new presses energy requirement without any carbon emissions.  The RMGT G3 LED-UV curing technology protects Metzgers pressmen as well since LED-UV inks don’t emit VOCs.  “While productivity and print quality were the most decisive factors in our decision, staying with our Green Printing Initiative was extremely important as well.  You can’t beat LED-UV for low emissions printing,” says Tom Metzger.

Metzgers Printing + Mailing continues to lead the Midwest print industry with best-in-class digital and offset printing, wide-format and display printing, highly specialized fulfillment services and customer-oriented web-to-print storefronts from its 140,000 square foot complex in Toledo, Ohio.  With the third generation of the Metzgers family joining the company, the original Mission Statement stays the same:  “We ensure the vitality and growth of our business by consistently exceeding the expectations of our customers and ourselves. We must treat customers and fellow workers as we would like to be treated — with fairness, honesty, and a high standard of ethics. Working and living within this mission will assure our company of continued success.”