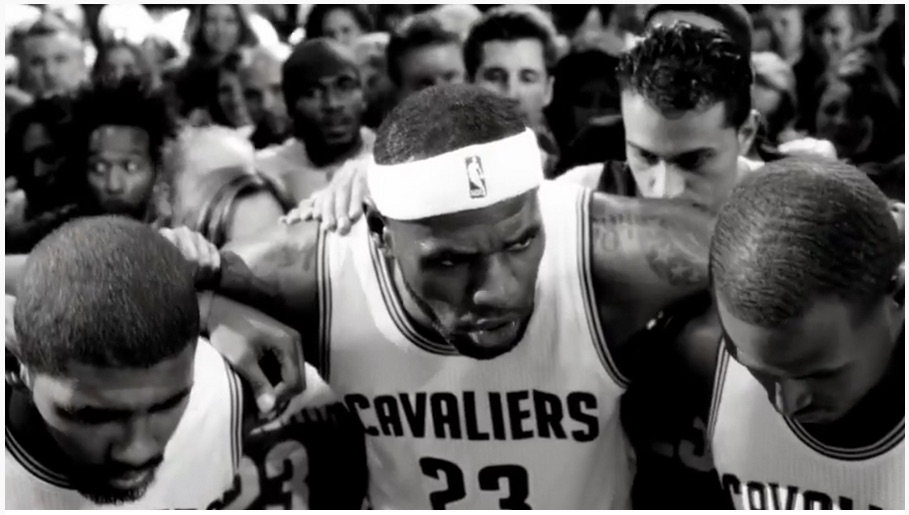 Nike is making its presence felt in Cleveland on a very big day for LeBron James and the Cleveland Cavaliers.

In addition to the 10-story “Welcome Home LeBron” banner on the Sherwin-Williams building a block from Quicken Loans Arena, the apparel giant released a two-minute “Together” video that generated quite a bit of buzz on social media in the hours leading up to the Cavs’ season opener against the New York Knicks on Thursday, Oct. 30.

In the video, James and Cavaliers teammates Kyrie Irving, Dion Waiters, Anderson Varejao, Shawn Marion, Tristan Thompson, Matthew Dellavedova and Joe Harris gather prior to tipoff, then are joined by fans. James’ mother, Gloria, appears in the spot, as does Dru Joyce, his former coach at St. Vincent-St. Mary High School in Akron.

“Everything that we do on this floor, it’s because of this city,” James tells his teammates in the commercial. “We owe them.”

The video ends with James, his teammates and thousands of fans chanting “hard work” and “together.”

“It’s all us,” James says near the commercial’s conclusion. “Cleveland on three.”

Nike Basketball partnered with Portland-based ad agency Wieden + Kennedy to create the commercial. It will air during TNT’s broadcast of the Cavs-Knicks game, which begins at 8 p.m.

James is one of Nike’s most prominent endorsers. The four-time NBA MVP signed a seven-year contract that reportedly was worth $90 million before he was drafted first overall by the Cavs in 2003. Forbesreported in July that James earns about $20 million per year, including royalties, from his Nike deal.

In the story, the magazine estimated that James made $72.3 million in salary and endorsements in the previous 12 months, upping his career earnings to $450 million.

The Nike spot coincides with the launch of the LEBRON 12 ‘HRT OF A LION’ — $200 sneakers that are now available for purchase.