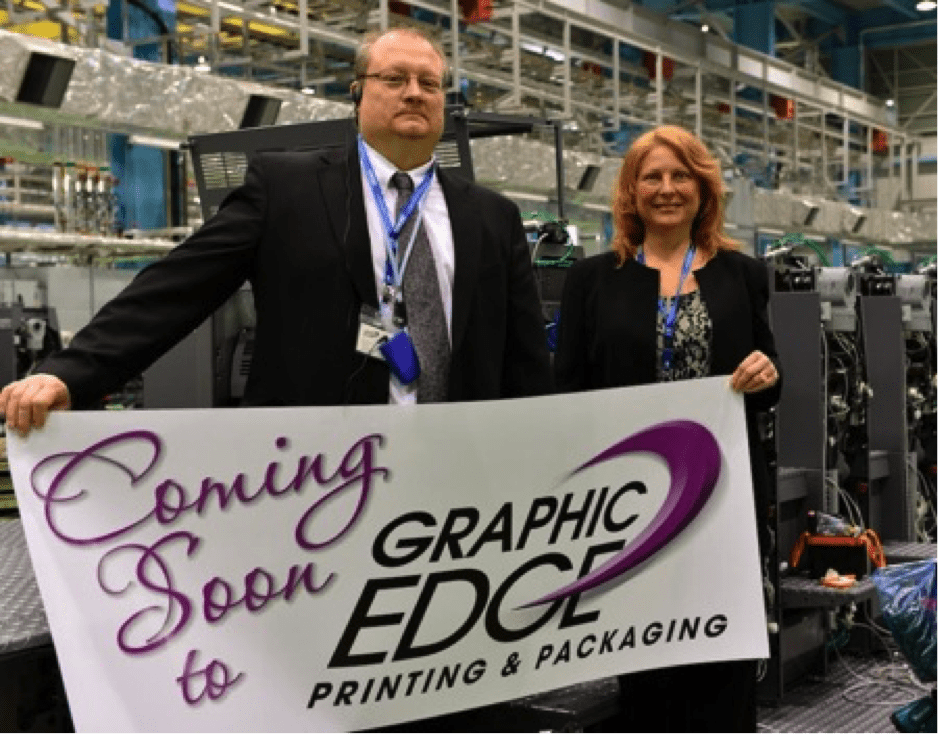 SOLON, OH (Tuesday, April 29, 2014) MILWAUKEE – Graphic Edge Printing & Packaging, a successful, fast-growing commercial and package printer in metro Milwaukee, next month will take delivery of a new 5-color, 6-up press custom configured to accommodate up to 31-point board for package printing.

It will be the first U.S. installation of the 31-inch RYOBI 755XL-D Packaging Edition offset press – which beat out competing 6-up offerings from German and Japanese press manufacturers based on Ryobi’s attractive entry price, low total operating cost and record of reliability. The new press will be among the spotlighted topics at the RYOBI MHI Open House May 7-8 in metro Atlanta.

The new Ryobi Packaging Edition press features automatic deployment and retraction of transfer drums to accommodate stocks ranging from onion skin to heavy board stock. It also features a special heavy-duty feeder as well as an air-guide system to ‘float’ sheets through the 16,000-sph press without marking. Ryobi’s Smart Make-Ready technology drives make-readies down to six minutes.

As part of their decision on the new press, Dale and Dawn Skinkis traveled to the RYOBI MHI Graphic Technology manufacturing center near Hiroshima, Japan, where they saw their press being built. They also visited a Japanese commercial and package printer, nearly identically in size and capability to Graphic Edge, which had the RYOBI 755XL-D running at full production.

“We’d done extensive due diligence and testing of RYOBI’s 6-up press in the U.S. We couldn’t find a single printer who had anything bad to say about it – and it never failed any of our print tests,” Skinkis explained. “In addition, we already own several Ryobi presses, including the 2-up RYOBI 524GE press, which ran for more than three years without a single maintenance call. Print quality was a given because we know Ryobi prints an extremely true, clean dot.”

“So we were pretty sure the Ryobi Packaging Edition press was the one to help us grow our business. But we wanted to see the retractable ‘skeleton drums’ in action – this is the critical technology that enables printing of heavy stock,” said Skinkis.

“After seeing the press in the Ryobi factory, and running full-out on the printer’s floor, we knew this was the press for us – no hesitation, no question. We finalized the order right on the spot.”

Skinkis said the new press will drive new growth in package printing for Graphic Edge. The company’s niche: quick prototyping and then printing of folding carton retail packaging, from as little as 500 up to 20,000 units, in extremely quick turnarounds.

Typically, creating retail packaging takes four to six weeks longer, but Graphic Edge will be able to do it in as little as 48 hours.

“The market for package printing is shifting with the growth of on-demand market well, on quality and price, you get the business.”

Dale Skinkis went into the printing business right out of high school – and never looked back. After working for a printer for more than a decade, he set up shop in the basement of his home in Brown Deer, Wisconsin, producing letterheads and other commercial print on an AB Dick one-color offset press equipped with a T-Head. He met his wife Dawn at the bindery house he outsourced his work to.

Business grew briskly, fueled by packaging work for a supplier of printed wraps for disposable cameras. In 2000, Dale and Dawn moved the business to an 18,000-square-foot facility in Hubertus, Wisconsin, northwest of Milwaukee. For years, their largest was a six-color Heidelberg. Now, all work previously run on the Heidelberg will be moved to the new RYOBI 755XL-D. “We see a very bright future for package printing,” Dale Skinkis explained.

“We also believe offset can very effectively compete with digital printing for a long time to come on general commercial printing, packaging printing and specialty printing. With offset, it’s all about great marketing – and great service.”

“In fact, we have a saying at our company: ‘Great service is good business.'”